If you’ve read any innovation or R&D advice lately, you’ve most likely seen this common sentiment: Innovate with the customer in mind. With everyone spending more time at home these days, consumer wants and needs have shifted dramatically and continue to evolve. Personal residences have transformed into offices, classrooms, workout studios, and more out of necessity. Because of this strain, consumers are more inclined to invest in technologies to improve the functionality of their space. Home automation can also provide convenience, comfort, energy savings, and general optimization of day to day life and routines. The burgeoning interest in this technology provides an opportunity that businesses can’t ignore - the smart home market is projected to be worth $292.43B by 2024 and the output of relevant intellectual property continues to grow year over year (Figure 1). 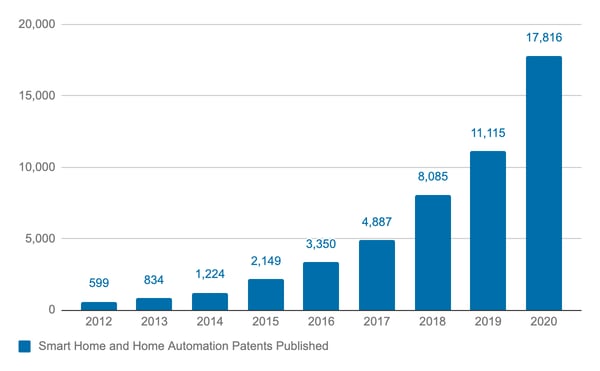 Though it sounds futuristic, the concept of domotics is not new. Automation, at the task level, was first brought into the home at the beginning of the 20th century with appliances like dishwashers, vacuums, and washing machines. Though it took several decades for them to become mainstream, these machines took much of the manual labor out of time-consuming housework. By the 1930s, some consumer electronics like garage doors and radios came equipped with remote controls to operate them from a distance. While none of these early domestic technologies were “smart” by definition, they did contribute to the advancement of home automation by laying the foundation for what would later come.

A few decades later in the 1960s, the first smart home computer system that allowed users to manage automation was developed. The ECHO IV started as a passion project of an engineer who built the prototype with parts salvaged from his employer. The system could perform basic tasks like controlling the temperature and powering appliances on or off. It was followed shortly thereafter by the Honeywell Kitchen Computer, a device that promised to store recipes and generate menus. While these early iterations failed to take off commercially, due to their cost and complexity, they did get other innovators thinking about practical applications for computers in the home. The rise of personal computers coupled with general advancements in information technology, like the X10 Home Automation Project, a significant turning point in the development of home automation. Later, the advent of the internet, the evolution of communication protocols, and development of IoT and Wi-Fi enabled devices delivered the concept of the smart home we know today. 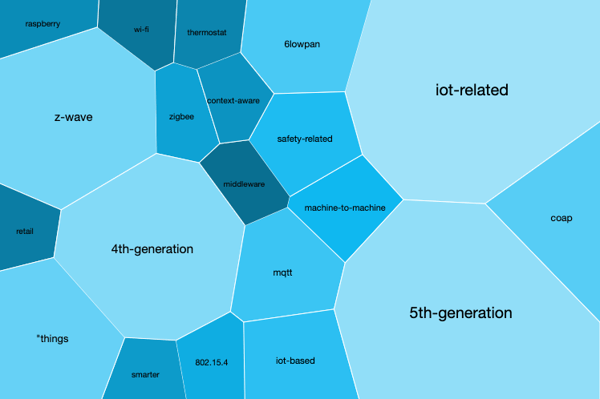 Generally speaking, a smart home environment usually consists of a) a Network, b) Control System, and c) Devices. To start, the network acts as a bridge between the control system and devices. The control system acquires, processes and reacts to information it receives from the network. The devices under control include all connected appliances and electronics; they are often equipped with sensors, actuators, or sometimes both. However, the set up of a home automation system can be far more complex, as a number of foundational technologies can be used to build it. For example, the network can be a wired, wireless or hybrid connection. Depending on the connection, different communication protocols and standards will be employed (Figure 2). Protocols like X10 and UPB are commonly used in wired set ups, while options like Zigbee and Z-Wave are used in wireless environments. Because there is not a single, universal way to construct a smart environment, different protocols cause issues and limit interoperability between devices. 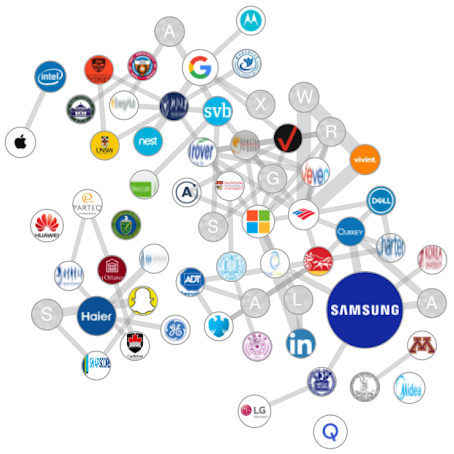 Figure 3: Industry Networks - Top organizations contributing to “Smart Home” OR “Home Automation” tech, with the volume of activity indicated by size of the circle. Collaboration between organizations are shown as connected lines, with the width of lines indicating strength of relationships. Source: Wellspring for Tech Scouting Data.

But despite this fragmentation and integration challenges, consumers aren’t scared off. In fact, it’s not just early adopters who are clamoring for this tech; with over 90 million smart home units sold in the US from 2016 to 2019, it’s safe to assume the early to late majority is willing to accept the technology despite its imperfections. It’s this interest that has R&D and innovation teams at companies across a variety of industries questioning how they can get in on the action. Smart home technologies are being developed across a variety of segments including security, construction, entertainment, lighting, HVAC, and consumer electronics. While all of this activity and the number of players in the game (Figure 3) may imply the market is saturated, there’s still plenty of room - especially for industries that haven’t ventured into smart home tech just yet. Here’s how any organization can get involved in home automation:

The most obvious opportunity is to improve upon existing smart home technologies, and it may be as simple as building a better mousetrap. The proliferation of products like Ring's doorbell and Nest’s thermostat have helped consumers become well acquainted with IoT devices and understand the value of home automation technology. However, many of these devices have a limited lifespan and are showing signs of age. In other cases, manufactures have made their own equipment obsolete, bricking their own technology. As the immaturity and limitations of early generation smart home tech become more obvious, consumers will phase out their existing gadgets for better solutions. And when they do they will have higher expectations, looking for products that can do more - perhaps leveraging biometrics to create user adaptive, context-aware environments. Here are some Flintbox opportunities and licensable technologies to consider:

While locking doors and turning off lights from your phone is a relatively newfound convenience, the potential of smart home tech is seemingly unbounded. Imagine a world where alarm clocks sync with calendars, automatically adjusting wake up calls based on the schedule of the next day. Toilets may monitor health and provide diagnostics. And perhaps, in addition to washers and dryers, a machine may take over the simple task of folding laundry. In another decade or so it may be commonplace to have a robot assistant in every house, helping with everything from tidying up to greeting guests. This tech isn’t readily available to consumers (yet), but isn’t out of the realm of possibilities. Keeping an eye on publications and patents can inspire teams to find new ways to optimize the home - and help keep them competitive. Here are some ideas to get started:

Established organizations from a variety of industries, markets, and segments often struggle to break into the smart home space. Though they are leaders in their respective domains, they fail to penetrate this market because they don’t have the internal experience with this tech or in-house subject matter experts. Conversely, smart home startups understand the finer points of home automation and offer a fresh perspective with promising ideas. But as is the case with many emerging organizations, they often lack the funding, manpower, bandwidth, and other resources to make an impact and gain recognition. On top of that, their leaders may have insufficient professional experience necessary to launch products and break into a market. It is mutually beneficial for large organizations, SMBs, and startups to collaborate, sharing insights and resources. Here are a few startups to watch: