Over the past 25 years, the food manufacturing and agricultural industries have helped showcase the importance and functionality of genetic modification. The first genetically engineered produce, the Flavr Savr tomato, was introduced in 1994 and swept the nation with its promise to slow down the ripening process (therefore delaying rotting and softening). Though its commercial success was short-lived, it inspired decades of ongoing, scientific research on the impact of genetically modified crops. Today, genetic engineering has surpassed the ability to control the speed of a ripening fruit. Researchers have used this technology to make the growing process more sustainable and to improve the overall quality (and shelf life) of crops – developing non-crying onions, larger tomatoes, and plants that aid with pollution. 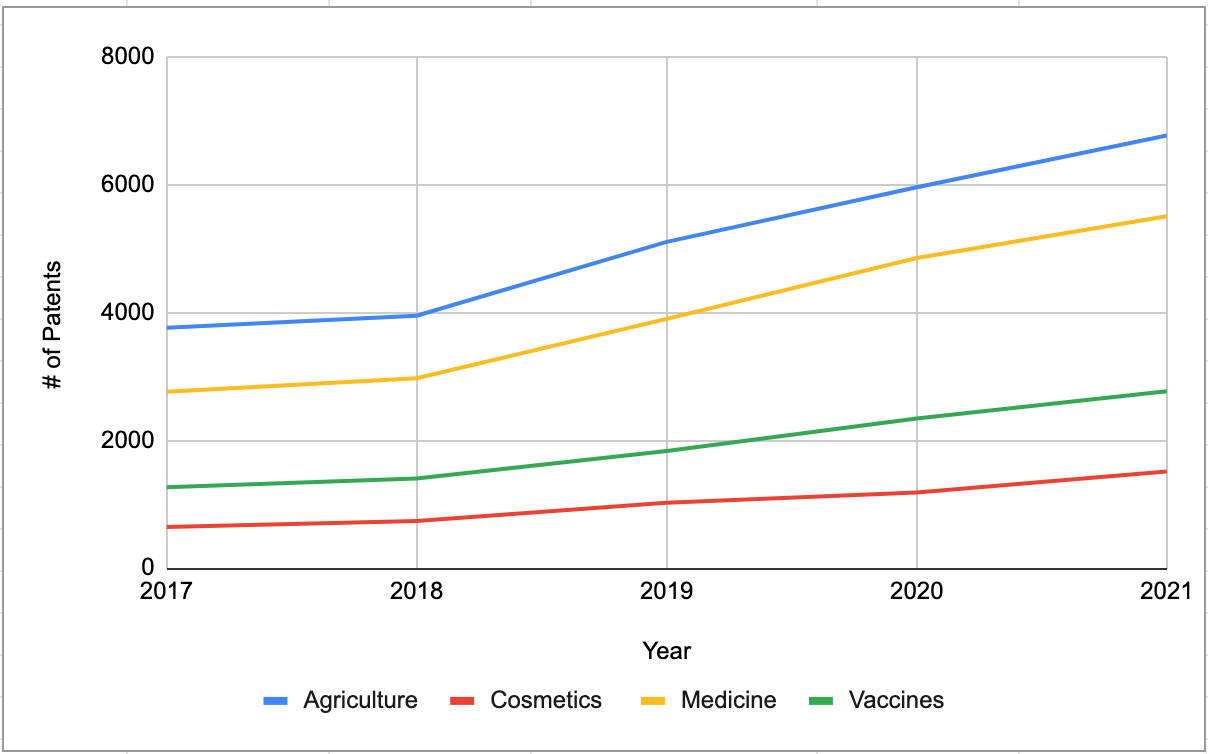 While genetic modification is commonly associated with the agricultural industry, the technology has a multitude of applications. Genetic engineering has evolved to play a role in industries from biotechnology to medical production to beauty and wellness. Genetic modification has revolutionized the way we produce medicine, create vaccines, and develop beauty products – while making the products more convenient and the processes more sustainable. Some notable contributions include:

When insulin was first introduced as a treatment for diabetes, it had been taken from natural sources, including pig and cattle pancreases. However, there are major issues associated with animal-sourced insulin including the limited supply of insulin extracted from eligible animals, moral objections, and allergic reactions in patients. Luckily, genetic engineering techniques made the production of synthetic insulin possible in the early 80s. The genetic modification copies the DNA code for human insulin and uses a DNA vector and enzymes to create human-like insulin that can be fermented to make millions. First, the human gene for insulin is cut from a strand of DNA using a restriction enzyme. Then, the DNA is inserted into a plasmid or virus using a ligase enzyme, rejoining the new insulin DNA with the original cell’s. The plasmid is then placed inside of bacteria, which is fermented and reproduces to make millions of copies – reducing the shortage of animal-based insulin; reducing adverse effects; and reducing any ethical or religious issues.

As a result of the Covid-19 pandemic, genetic engineering once again proved its worth. Both AstraZeneca and Johnson and Johnson utilized GMO-like techniques when creating their Covid-19 vaccines. Similar to the process used to create insulin, these two vaccines utilized a “viral vector” – adenovirus – to copy and strip down the Sars-CoV-2 spike protein. Unlike the production of insulin, the adenovirus was not placed into a bacteria to reproduce; instead, the adenovirus was injected into the human bloodstream, using the new spike protein DNA to teach other cells to copy it into their DNA.  This effort is prophylactic, intended to protect people from Covid-19, but the mRNA process can also help cells attack on the offense as well. The new method of utilizing mRNA techniques not only modifies the way vaccinations are being created, it also proves to activate specific types of cells faster, and can target specific cell functions such as preventive growth.

Palm oil is a limited resource that is heavily used in the cosmetic and agricultural industries. Currently, over 66 million acres of Earth’s surface are being used for palm oil production. Beyond just the scope of lipstick and soap, palm oil is the most used vegetable oil in the United States, as well as appearing in the production of biofuel. Besides the large area it requires, palm oil also contributes to deforestation, animal extinction,  amongst other environmental issues. As a result of the known harm palm oil production causes, the beauty industry is shifting to create a socially and environmentally cautious solution.In 2019, a New York City based biotech company, C16 Bioscience, took the industry by storm when they closed a billion-dollar deal with Bill Gates’s Breakthrough Energy, using a fermentation process to create a sustainably produced substitute to palm oil. C16 is using fermentation to convert raw materials into commercial consumer products. Creating this faux palm oil is the same process of fermenting microbes to brew beer – utilizing yeast-fermed microbes and specialized bioreactors the oil is produced intracellularly.

These evolutions are not only beneficial for the environment and consumer’s ethics, but in the long run, it is economically advantageous for the industry as well. The Tufts Center for Study for Drug Development estimates a new biotechnology’s cost to be around $1.2 billion; however, once the technology is developed and implemented the cost of production greatly decreases. This also opens an area for partnership within the industry, as many major companies may reduce their initial investment while maintaining their position as front runner in the industry, and reducing their production costs in the long run.

But aren’t we still “Anti-GMO?”

While there are many benefits to genetic modification and genetic engineering, the pop-culture phrase “GMO” still has a negative connotation. Many companies, the leading beauty and wellness company specifically, ensure their marketing departments highlight the “non-GMO” or “GMO-free” aspects of their products. However, despite the controversial notion of GMOs, the majority of western consumers are not concerned or deterred by the notion of genetic modification within the process of production. The Alliance for Science found that consumers “[were more] receptive to using gene editing tools in agriculture if they bring social, economic and environmental benefits.” This is illustrated by the revenue increases in all three industries discussed below.

An important note when considering the ever-evolving convenience that genetic modification brings consumers is their current state in the world. While many industries took a turn for the worse given international shutdowns, the three emerging industries discussed here were on the up and up:

Investments made by organizations in these industries helped protect them against major, pandemic-related losses.

Genetic engineering technology will continue to evolve, especially in response to shifting consumer priorities like convenience and sustainability. While there have been many advancements in sustainability, there are still limitless possibilities to expand in the market. One of the beauties of biotechnology is its ability to transcend multiple industries with one discovery. Here are several Flintbox discoveries and licenses that have applications in several sectors, like cosmetics and pharmaceuticals or wellness and biofuels:

As illustrated by the mention of high palm oil and its massive surface area requirements, imaging any sort of limited natural resource’s substitute would greatly benefit the environment and expedite the production of customer-led innovations.  Similar to its impact on food production, genetic modification could be the key to discovering new methods of sustainably sourcing ingredients or developing alternatives to natural resources; In turn,  advancements, like oxidizing facial oils, could lead to solutions in regards to petroleum, natural gas, coal, and more. Despite the endless possibilities of future technology, there are many patents and other technologies that have just hit the market, keep an eye out specifically in the beauty and biotechnology industries:

There is a high barrier to entry when it comes to genetic modification: the cost. Many start-ups focused on this technology do not have the funds, manpower, or experience in the industry to effectively leverage their expertise or intellectual property. Likewise, many established companies need to incorporate novel technologies to stay competitive but lack the internal capabilities to do so. By partnering together, new biotech start-ups and global companies have an opportunity to shape new markets and sectors. Here are the start-ups who utilize and leverage  genetic modification to keep up with the consumer needs:

Photo by Nataliya Vaitkevich from Pexels