Why the EU, UK, US, and Japan are Exploring Space-Based Solar Power

Throughout the twentieth century, Konstantin Tsiolkovsky’s idea that solar power stations in space could generate power was a source of creativity and inspiration for science fiction writers. Today, however, in conjunction with Peter Glaser’s 1973 patent for solar-powered satellites, the fiction of the past could be the answers of the future.

Harvesting solar energy from space-based power systems has intrigued the research community for decades. Though the concept of space-based power systems (SBPS) is hardly new, there has been renewed focus amongst government agencies, universities, and as of late private and public aerospace companies. As sustainability and cleantech alternatives play a larger role in the discussions of our future, the need to find reliable power solutions amplifies.

Discussions surrounding space-based energy took off in the late 1990s and early 2000s with large players in the aerospace industry, including NASA and the ESA, making large strides in the research and development of a potential solar solution. In 1998, NASA launched the Institute for Advanced Concepts to explore revolutionary aeronautics and space concepts, supplementing NASA’s own in-house activities with external ideas. This program was part of NASA’s strategic vision to develop new technologies to address existing needs and inform future research and initiatives. The NIAC funded over 160 ideas during its 9 years of operation, including an investigation into the potential of space solar power systems.

The European Space Agency (ESA) followed NASA’s lead, launching the European Network on Solar Power and Space in 2002. The new division was broken into a timeline of three phases determining the capabilities of terrestrial solar power, the potential power of space-based satellites, and making the decision of how to best proceed given the possibility of clean technology. This program concluded its first phase in 2008, spinning off into other areas of interest and evolving into new programs entirely. Their not-so-conclusive conclusion found that space-based power alternatives were an area of interest, but too far in the future given the available technology and cost to launch these potential solution systems. While the discussion of solar energy technology didn’t stop, the construction of such systems took a back seat to other initiatives of the early aughts.

Solar energy sparked excitement, but there were financial constraints and unanswered questions regarding the construction and launch of technology that had not yet been created. These factors expanded the SBP timeline into the future. While the discussion of solar energy technology didn’t stop, the construction of such systems took a back seat to other initiatives of the early 2000s.

Almost two decades later, the European Space Agency, the United Kingdom Space Agency, the Japanese Aerospace Exploration Agency, and the National Aeronautics and Space Administration have all re-opened their investigations into solar space energy sources. Incentivized by looming government commitments to net-zero emissions, these space agencies are actively researching modern solutions to the same obstacles posed over a decade ago. While many of these challenges still persist, recent technology advancements offer new hope, paving the path towards a new outlet of clean technology.

In addition to the efforts made by government agencies and research institutes, private companies have also contributed to overcoming the primary obstacles that stood in our way terrestrially: priorities, production, and cost. Private space organizations, like SpaceX, have made substantial efforts to mass produce launch and satellite equipment. Their success in this area proves the extreme costs associated with space-based power systems are not as unrealistically high as estimated two decades ago.

Given two additional decades of research, a re-shifted focus towards cleantech initiatives, and advancements in terrestrial solar technology, these four global players have announced exciting programs that will result in space-based power solutions between 2030 and 2050; clearly making the notion of space-based power systems a realistic and timely dream come true.

While conducting their own internal research on solar power satellites in 2021, the ESA launched an open innovation campaign supporting the development of space-based clean energy. Accepting submissions through the Open Space Innovation Platform (OSIP), the ESA sought to learn more about the feasibility of transferring solar energy from space to Earth. The broad prompt also calls into question related considerations and obstacles space-based solar power currently faces, like:

The campaign generated 85 proposals, submitted by universities, start-ups, corporations, and private and public space organizations. Of the 85 contenders, 16 were selected for funding: 7 for system studies, 5 for early technology development, and 4 for co-funded research proposals. Despite the limited release of information surrounding their progress, their efforts are ongoing as they validate and test these ideas.

Outside of this campaign, the ESA continues to pursue a pathway towards the safe and efficient use of space-based solar power. Through their collaborations and partnerships, they are exploring relevant topics - like the regulation, transmission, and conversion of energy generated in space - with the goal of reducing carbon emissions. 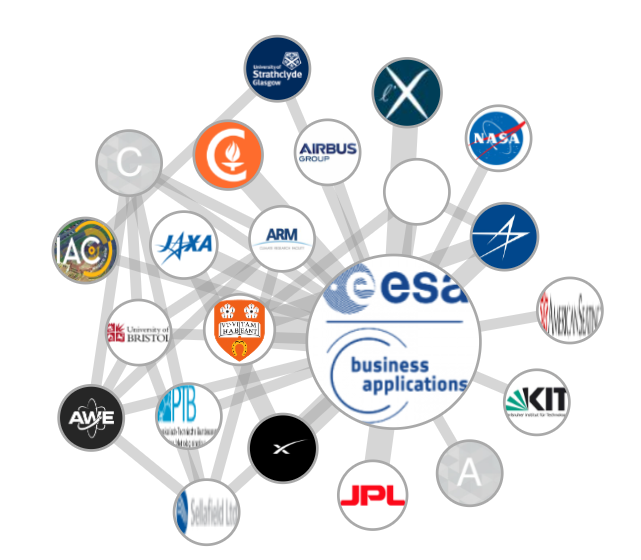 Portfolio: A sample of institutions and organizations collaborating with the European Space Agency on space-based solar power. (Source: Wellspring Scout)

The UK, a participating member of the ESA, is considering plans for a $22 billion dollar solar power space station that can receive and absorb light 24/7. With growing demand for energy and government-sponsored environmental initiatives, the UK is investigating all options to achieve net-zero status by 2050. As such, space-based solar is one of the many disruptive technologies that will be explored through the Net Zero Innovation Portfolio, a fund dedicated to combating climate change.

Plans for the space station include an oversized spacecraft covered in solar panels to receive and absorb light 24/7. The station would absorb high-frequency radio waves and transfer them – wirelessly – down to a retenna (large antenna), on Earth. Once received by the retenna, the radio waves would be converted into DC electricity, then transferred to the various power grids. Since terrestrial stations – large solar panels on Earth’s surface – are reliant on daylight and weather conditions, the energy harvested in space could supplement the energy generated from current efforts. Plus, orbiting solar panels can capture more than 13 times the energy than their terrestrial counterparts.

The UK was one of the first major economies to pass legislation pursuing net-zero by 2050; part of this effort looks to new advances in solar energy. This ambitious goal still has several obstacles – similar to questions the ESA posed – that must be addressed while pursuing this clean alternative to natural gas:

Another large government-sponsored program in the works is JAXA’s Space Solar Power Systems. The Solar Space Power System will consist of two parts: an orbital and a terrestrial system. The orbital system will utilize solar collectors in geosynchronous orbit to transmit electricity down to the terrestrial system. The Earth-based equipment will be made up of 5 billion tiny rectifying antennas to absorb microwaves into DC electricity through an island substation and then send electricity to the Tokyo power grids using an underwater cable. Japanese researchers are in the midst of demonstrating their transmittable technology, aiming to project an operational SSPS by 2025.

There are three additional areas of investigation, research, and development related to ongoing efforts that JAXA is putting their resources into during the years leading up to the SSPS launch:

These three pieces of technology are the key to demonstrating a sustainable, efficient solar space power system. The solar energy system will be able to generate power not only for Tokyo citizens but also for rural areas that need electricity. The laser wireless power transmission systems will also allow the microwaves to be directed to other parts of the terrestrial surface, which will have various antennas to absorb and convert the space-generated power.

Another benefit of the SSPS’s construction will be the reduction in Japan’s dependency on nuclear power. Nuclear energy has been the primary source of power in Japan since the late 1960s, and accounts for about 30% of Japanese power. Due to the risk of death and injury for civilians, coupled with the high rate of tsunamis and earthquakes, Japanese officials are in pursuit of decreasing their nuclear energy usage. They hope to reduce their nuclear power suppy down to 20-22% by 2030, coinciding with the launch of the SSPS in the 2030s.

The aforementioned NASA Institute for Advanced Concepts program has evolved in recent years into the NASA Innovative Advanced Concepts (NIAC). Keeping ties to its humble beginnings, when the initiative was established in response to the deregulation of state power distribution in a large sector of the U.S., the program now welcomes ideas from non-traditional sources hoping to “change the possible.” Its evolution has highlighted the various needs for timely issues over the years – like the 2012 Curisosity Mission, landing the Mars Rover in pursuit of learning more about the red planet's environment – as well as NASA’s dedication to finding the best path forward for space-based power systems.

Today, the NIAC has shifted their interests back to potential alternatives to terrestrial solar power, having recently announced that they will reopen inquiries from the past few decades. While NASA faces the same obstacles previously identified with other government organizations, NASA has also made strides towards success given recent technological advances: namely, 3D printing. The University of Liverpool, in partnership with NASA is currently researching the possibility of solar sails, utilizing new production techniques for printing ultralight solar cells. Solar sails are lightweight, reflective panels that can absorb the sun’s radiation and potentially propel space crafts without using fuel.

Press: Solar power stations in space could be the answer to our energy needs (Source: Wellspring Scout)

While NASA is still looking at how to overcome the three major challenges of cost, assembly and terrestrial power absorption, the advances currently being investigated may answer the questions of future priorities as well. While it is not the solution or alternative to terrestrial solar power, the notion of fuel-free propellition using solar sails could be a great asset for the lunar gateway station and lunar rovers to come. Perhaps the future of space based power systems is closer to home than we think.

Image by SpaceX-Imagery from Pixabay