In a recent study, the Solar Renewable Energy Credits (SREC) reported that solar panel usage is up, with 1 in every 2,400 households installing solar technology annually. Solar energy only made up 3% of the United States’s electricity generation in 2020, but this number is expected to grow exponentially over the next two decades. Emerging players and advanced capabilities have made this technology much more accessible in recent years with companies like Tesla developing products (since its SolarCity acquisition) to efficiently capture and store solar energy. Over the past year, Tesla has installed over 400,000 solar panels and continues to make headlines for its work in solar and cleantech.

Despite the average increase over the last decade, the issue of solar’s intermittency has proven to be a consistent obstacle. Overcast skies and limited sunshine reduce the amount of energy a panel can generate, but recent discoveries at several universities globally may have found a solution to our terrestrial limitation. The other major barrier to solar adoption, especially in regard to lower-income municipalities is a lack of arable land, has recently been overcome as the popularity of floatovoltaics has proven itself efficient and effective.

Many countries have announced green energy initiatives to move to a more sustainable future. For example, the United States Department of Energy plans to have 35% of electricity generated through solar energy by 2035, and 40% by 2040. While the current usage and adoption numbers seem low, major advancements from university and government research have made cleantech alternatives a realistic possibility. These ambitious, but achievable, goals are attainable as a result of the current research being conducted globally.

Currently, the most popular photovoltaic used is silicon solar cells. While these cells generate electricity with a 26.7% power conversion rate, they are heavy and lack efficiency. This energy is used for industrial production and relies on single-junction cell architecture. Multi-layer solar junctions, often referred to as tandem cells, are necessary to obtain a power conversion efficiency of over 30%.

Tandem solar cells are made up of two or more subcells, electrically using their interconnecting layers (ICLs). While the ICLs show potential for a more efficient power source, they were slower than other forms of multi-junctions until a recent discovery at the National University of Singapore, (NUS).

The Solar Energy Research Institute, a part of NUS, successfully created efficient power conversion solar cells utilizing their discoveries in perovskite and organic materials. Compared to other perovskite cells, the NUS technology generated a power conversion efficiency of 23.6%, an over 3% increase compared to the standard. The stand-out features of this discovery go beyond just their power ability: they are flexible, light-weight, low cost, and ultra-thin photovoltaic cells. NUS’s success stemmed from reduced voltage loss and ICL optimization. This successful lightweight discovery promises a future of potential tandem solar cells. With a promising future for lightweight, fast, and low-cost solar cells, the future of solar power looks bright. Not only is there a benefit of lower cost, lower terrestrial area required, and speed, but there is also a pathway leading to overall cleantech and a reduction in carbonization.

One of the well-known disadvantages of terrestrial solar energy systems is that they cannot produce light at night – until now. A recent Stanford study found a new source of potential energy, borrowing technology previously used for cooling paint and energy-efficient air-conditioning. Researchers hypothesized that radiative cooling techniques could be used in the desert to capture the heat released by solar panels at night after solar absorption. Their prototype was able to produce enough light to power LED lights and charge a smartphone.

The possibility behind this discovery is that solar cells could utilize thermoelectric generator molecules (TEGs), which convert temperature differences into electrical energy. If solar panels in the desert and other climates with severe temperature swings had TEGs and heat sinks with an aluminum layer between them, they would be able to produce solar energy. Nocturnal thermal energy conversion produces about 25% of the wattage a full day of sunlight does. Thermo generator molecules are also advantageous as their battery life lasts longer than the current battery units used to store energy in regular solar sheets.

The Stanford team has high hopes for the possibilities that thermoradion may contribute to the current solar energy efforts, and plan to expand their current studies. The next steps to move forward include re-engineering the solar cells to improve their solar power generation using radioactive absorption as their source of energy. 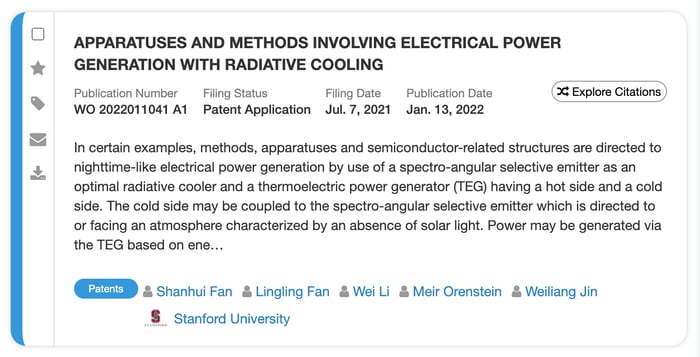 Many government agencies have prioritized research in renewable and sustainable energy, with teams looking for novel and efficient technologies to generate power. The United States Natural Renewable Energy Laboratory (NREL), like many other government agencies, is dedicated to advancing renewable and sustainable energy. They are committed to the research, development, and deployment of clean energy technologies, focusing on areas like materials, efficiency, storage, and many more.

NREL also runs a number of special projects, including programs to help provide resources and potential solutions that could benefit rural and low-income communities, a demographic that is often underserved or ignored by cleantech initiatives. Their work has made investing in green energy generation feasible in places like Cohoes, New York.

Two Cohoes city council members struggled to find a solution to alternative sustainable energy. Inspiration struck when they began thinking about a creative solution for powering municipal buildings using solar energy. Financial constraints, lack of extra acreage for solar farms, and their buildings' slated roofs inability to install solar panels also served as a challenge to a potential solar solution. Instead of giving up, the city planners looked to the water: a local 10-acre reservoir provided a potential solution.

Knowing that they would need external funding, the duo worked on a pitch for a floating solar installation system. Research from a 2018 United States Natural Renewable Energy Lab (NREL) report would prove to be invaluable to their efforts. The study stated that if only a portion of man-made reservoirs– those currently unused for fishing, mining, and civilian recreation – were utilized with floating solar panels in the US, it could contribute to 10% of natural energy. Cohoes shows the enormous potential that floating solar panels may have, both for the sustainability of small towns, as well as the larger effort to increase terrestrial solar power.

NREL research suggests that floatovoltaics is a rather expansive and unexplored area within renewable energy solutions. A 2020 report outlines the advantages of hybrid power generation, specifically hydropower and floating photovoltaic (FPV) systems. In line with this research, there are a number of emerging startups developing technology to convert terrestrial solar power into floating power generation sources that are as efficient and effective as possible:

Image by andreas160578 from Pixabay