Nearly every Olympics, we hear about a new broken world record in one sport or another. While much of this can be attributed to better training, coaching, and dietary techniques, the headlines never focus on the impact that technology has on these records. Although we like to believe that new records are a result of people pushing boundaries, this is not necessarily the case given the numerous examples that sporting records moved in lock-step with technological innovation. This has been especially evident in swimming, where technological innovation reached a point where it threatened the integrity of the competition.

As there is little technology used within swimming, much of the advancement and innovation has mainly focused on textiles. Since  athletes are required to be covered, most of the focus has been on reducing the drag caused by swimsuits because there is little else to alter other than removing body hair. 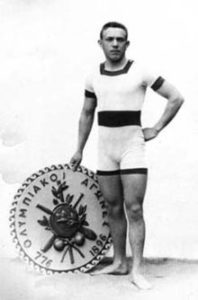 Since the start of the Olympics in 1896, the primary focus of swimsuits was modesty rather than performance. Suits covered the majority of the body and were made of wool, which made swimming difficult as they tended to absorb water and get increasingly heavier as the race went on. While materials like silk were lighter and less absorbent, their exorbitant cost prevented them from being available to most competitors.

The development of materials like nylon in the 50s and Lycra in the 80s set the pace of innovative swimwear. These  textiles enabled swimsuits to be form-fitting and less water absorbent made with  synthetic fibers  spun out of polymers. This means they  are one long solid strand, rather than multiple porous cotton strands woven together.

Further change came when designers better understood hydrodynamic forces; rather than minimizing the size and spread of the suit, it was understood that advantages could be gained from manipulating the body’s contact with water. Previous designers worked under the assumption that textile technology could not reduce the drag between human skin and water.
The best means of increasing speed was to minimize suit size as to maximize direct skin to water contact. 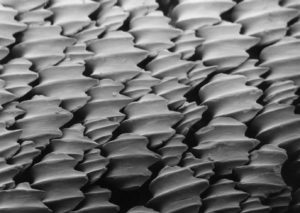 The development of Fastskin changed all that. Fastskin is a biomimetic material that is based on the design of shark skin; Fastskin mimics the dermal denticles found on shark skin that reduces drag more effectively than the smooth surface of human skin.

The development of Fastskin inspired further modification to the concept of full-body suits; Speedo developed a new type of body suit (aptly called the LZR) in collaboration with NASA that was specifically engineered to reduce drag and increase performance through the use of computational fluid dynamics. These fluid dynamic studies led to the creation of a new ultrasonic bonding technique, as it was identified that stitching increased drag by up to 6 percent. Furthermore, the suit offered compression in specific areas such as the abdomen, which reduced the need for athletes to expend energy on maintaining proper form; this compression also had the effect of trapping air in the suit, which increased the buoyancy of the swimmer. 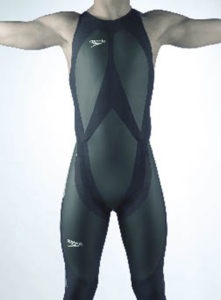 When introduced into Olympic swimming in the 2008 Beijing Olympics, the LZR had a tremendous impact on the competition results. Nearly 94% of races won and 98% of records broken were done by competitors wearing the suit. With the buoyancy and drag advantages apparently, competition got to the point where individuals were wearing two suits to maximize their competitive advantage. This led to significant claims of LZR being a form of ‘technological doping’, as it decreased natural ability as the primary influence on performance. In the graph below, a significant drop is identified the year the suit was certified for competition.

As a consequence of the rapid number of records that were broken, the International Swimming Federation (FINA) set rules that banned 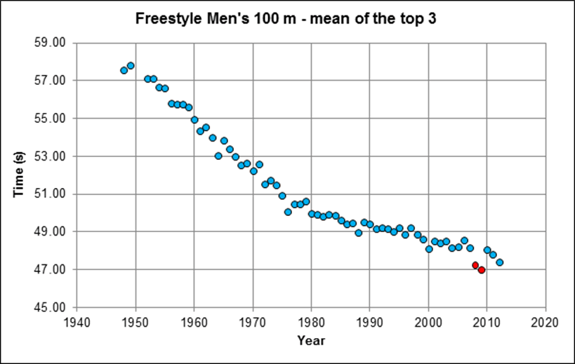 full-body suits and stipulated that all suits be made with ‘woven’ textiles; with little specification on what ‘textiles’ meant.

Given this ruling, the shift in innovation has changed towards swim caps and goggles, but given that these do not cover the body in full, it’s difficult to say what impact they will have on overall performance. I’m sure Michael Phelps would appreciate having crack proof goggles after his were stepped on before a race.

With the progress of technology being an inevitable influence on Olympic sports, it's critical to prevent technology from edging out human effort as the key focus of the games in order to maintain the integrity of the competition.