How Do Chemical Industry Leaders Innovate?

For many industries, innovation is a slow and costly process. This is especially true of capital-intensive verticals such as chemical manufacturing. Yet, innovation remains a top priority for corporate bosses in the chemical industry and a major necessity for continued growth. According to the American Chemical Council, American chemistry in 2014 invested $59 billion in research and development, which is more than the electronic, automobile, and health-care industries. External collaboration and IP protection are crucial elements to chemical industry innovation.

External Collaboration Is Too Important to Ignore

External collaboration has grown in the chemical industry for the better part of twenty years. According to the 2015 R&D Trends Forecast from the Industrial Research Institute’s annual survey, over 40 percent of top global chemical companies reported year-to-year sentiment to increase collaboration with strategic partners on R&D projects. Additionally, year-to-year sentiments to collaborate with universities and federal labs are increasing over 8 percent and 35 percent, respectively.

Additionally, in the 2016 PWC Global CEO Survey of leading chemical firms, 68 percent said that supply chain partners have a high or very high impact on strategy. They believed partnerships will help improve performance and create new business models. The study also found 71 percent of chemical industry CEOs (compared to 53 percent of CEOs overall) believed that innovation and R&D will deliver the highest returns. However, chemical industry R&D spend as a percentage of revenue is still below other industries such as industrials and automotive industries. This likely means that technology scouting for partnerships will need to have a large role in meeting their innovation plans.

The increased adoption of technology scouting and corporate venturing allows firms to widen their exposures to new technologies while avoiding large up-front investments that may never pay off. Those firms can identify more relevant technologies, adopt new practices and, ultimately, out-innovate the competition. 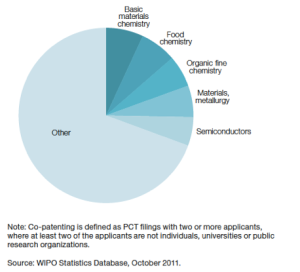 Interestingly, more intellectual property than ever before is being produced in China. According to the WIPO statistics database, the number of chemical patent publications in the United States stayed flat from 2007 to 2014 (~98,000). However, the United States dropped from 27 percent to 19 percent of all worldwide patent publications in that period. Other major players including Japan, Korea, Germany, France, and Switzerland also remained flat. China is the exception and is now the largest country of origin with over 208,000 patent applications in 2014. China quadrupled its patent applications from 2007 to 2014.

Predictably, filings specific to the chemical industry have seen robust growth. Patent applications for the chemical industry have shown a compound annual growth rate (CAGR) between 2010 and 2014 of over 7 percent. At an 18.3 percent CAGR, food chemistry has grown the most in that period, while basic materials chemistry and materials / metallurgy have grown to over a 10 percent CAGR.

Simply put, more discoveries are being made in increasingly diverse places, creating a larger pool of potentially useful technologies. However, both the rate of growth and the location of these new discoveries create serious barriers for companies who hope to innovate by means of adopting external knowledge. How can one company possibly hope to evaluate every new discovery for fit and feasibility?

The challenges are not small. Only the most organized, systematic, and process-driven firms will outpace their competition.

Pharmaceutical chemicals represented the largest category of patents in 2014:   15.7%

All eleven categories combined equaled over half-a-million new patents in 2014: 529,699