Operations of Innovation: What R&D Can Learn from Manufacturing

For the past three decades manufacturing firms have embraced supply chain management as the backbone of a scale-driven, competitive, and increasingly global economy. The value of a streamlined process was first demonstrated when Sakichi Toyoda implemented the Toyota Production System (TPS) in the early 1980s, and an increased emphasis on monitoring component pieces, improving partner relations, and systemizing continuous improvement has since been adopted by the majority of manufacturers worldwide. TPS and its many derivatives have taken off—and for good reason. Firms with strong operations management are on average more profitable, more adaptable to market changes, and more efficient in managing their supplier networks.

Nearly thirty years later, modern research operations have reached a perplexing crossroads. Globally, intellectual property is being produced at a logarithmic rate,[1] and new sources of knowledge are appearing in unexpected places.[2] At the same time, firms are struggling to adopt this external knowledge in meaningful ways and often miss new developments that they potentially could exploit.[3]

To stay ahead of the innovation curve, organizations should look for inspiration in the evolution of large manufacturing firms. It is true that research can be theoretical and difficult to predict, so a direct reproduction of supply chain operations is not usually possible. However, by applying some of the core concepts of operations management, such as cataloging and tracking component parts, developing deeper and broader relationship networks, and measuring activity to determine what does and does not work, research and development (R&D) departments and organizations as a whole will be more successful.

The Internet of Innovative Things

The digitization of manufacturing has been nothing short of revolutionary. The Internet of Things (IoT) has had such a dramatic effect, in fact, that a 2013 survey by the American Society for Quality found that of the firms currently using smart manufacturing processes, 82 percent experienced significantly increased efficiency.[4]

One of the major benefits to manufacturing firms that leverage IoT is the ability to analyze data about the flow of component parts in order to optimize performance. Managing supply chain productivity has been an obsession for operations leaders since the first assembly lines were constructed, and although incremental improvements have occurred over the past one hundred years, the largest leap appears to come once firms take an active role in digitally tracking, cataloging, and analyzing the movement of their tangible inputs.

Research operations need to apply a similar methodology to tracking their knowledge assets. It is true that IP filings have long been documented and stored digitally, but R&D success depends on so many more component parts than just patents and trademarks. A knowledge asset is any document that is contextual, relevant, and actionable and should include everything from project data to technology evaluations to subject matter experts outside of the organization. These types of knowledge assets are too often ignored or stored only in ad-hoc and highly dispersed systems.

There are untold efficiencies yet to be achieved by research operations simply because firms currently do not “know what they know” in terms of these untracked assets. However, just as IoT is more than a database of where and when parts fit into a process, a true knowledge supply chain is more than a repository for assets. The analysis of all the moving pieces is what sets IoT apart and what holds the greatest potential for innovation professionals as well. For instance, a client was able to see a 110 percent return on investment just by improving their ability to search for internal knowledge assets. In a world where scientific discovery is growing faster than any one human, or for that matter any one organization can absorb it all, the ability to connect to all of your intangible knowledge assets will lead to even deeper insights about how and when disruptive innovations are likely to occur.

The Power of Network Relationships

The keiretsu of Japanese industrial manufacturing represent perhaps the best example of efficient partnership networks. These close-knit groups of suppliers, vendors, and manufacturing conglomerates derive massive benefits from their relationships.

For example, in 1997 a fire started at the Aisin Seiki Co. Factory in Kariya, destroying much of the facility. At the time, Aisin Seiki produced 99 percent of a certain type of brake valve used in Toyota vehicles. As a result, this fire effectively shut down all Toyota operations nationwide.

However, executives at Toyota knew enough about their supplier network to identify other factories that would be capable of producing the desired part. Engineers at Toyota worked with these external parties to retrofit their machines and resume production.

Obviously this is an extreme example, and one that is closely tied to the realities of manufacturing, yet as researchers look to out-innovate the competition, the value of partner relationships cannot be overlooked.

For example, more than 50 percent of the inventions originated by Bell Laboratories are used outside the telephone industry.[6] Figure 1 shows the huge growth in R&D partnerships in recent decades, which reflects the importance of sourcing knowledge from external sources. 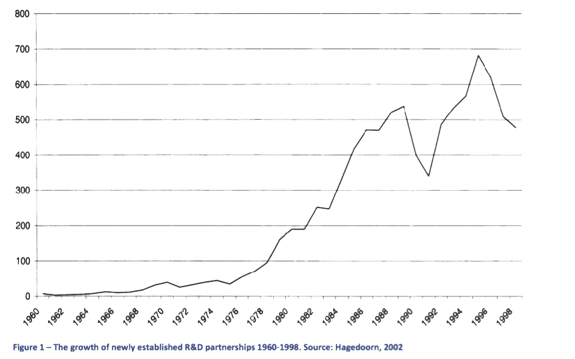 Furthermore, scientific discoveries are increasingly emerging in new places. Globalization has opened the door to new opportunities for collaboration with partners in remote markets and expanded the field of new technology producers. To exploit these new sources of technical discovery, knowledge networks need to become more open and responsive, and technology must be hunted in a systematic, repeatable, and efficient way.

Lean production, Six Sigma, and other continuous improvement techniques have achieved worldwide renown;[7] in fact a 2007 survey of US manufacturers showed that 70 percent of plants had adopted some form of continuous improvement program.[8] The desire to create a strong and repeatable process makes sense in manufacturing, and many programs focus on improving process flows by eliminating wasted effort.

Methodologies differ in their exact forms, but generally the process involves four steps: defining the goals, measuring and collecting data, analyzing that data for cause-and-effect relationships, and improving on the process through experimentation. This system should seem quite familiar to any researcher because it closely mirrors the scientific process for discovery. However, few firms have successfully deployed continuous improvement techniques within their research departments.

There are many reasons why continuous improvement techniques do not translate well to R&D, but the common argument is that R&D is not a linear process where defined inputs are transformed into completed outputs. Rather, research processes are asymmetrical, incremental, and notoriously difficult to predict.

These problems are certainly pervasive and likely to persist. However, research organizations that are able to collect holistic data on their R&D operations will be able to derive meaningful reports from that information, allowing them to better map their processes and improve the effectiveness of research operations over time.

To support this statement, a study showed that 98 percent of R&D-intensive firms are concerned with the problem of measuring R&D performance. In fact, control is deemed important despite the fact that traditionally it is seen as difficult to monitor R&D activities. Diagnosing the activities can then be used to support decision-making, such as resource allocation and investment selection decisions.[9]

While R&D may be fundamentally different from manufacturing and operations management, there are still some lessons to be learned. A top-down view of knowledge supply chain and interaction will provide managers with a baseline understanding of the entire innovation process. Continuous improvement for R&D should focus on reporting and powerful database relationships to find areas needing performance improvements.

Dr. Matthew Hamilton and Dr. Robert Lowe have spent more than a decade developing the concept of the knowledge supply chain, and their work has helped to shape the innovation strategy of hundreds of universities, hospitals, corporations, and governments around the world. Their white paper “Retooling R&D: Identify Your Hidden Knowledge Assets and Optimize the Supply Chain of Innovation” contains much more in-depth analysis of the subject and is available for download below.

An, Ationale For. “Innovation and Growth Rationale for an Innovation Strategy.” Organisation for Economic Co-operation and Development. Accessed May 27, 2015. http://www.oecd.org/science/inno/39374789.pdf.

Bornmann, Lutz, and Rüdiger Mutz. “Growth Rates of Modern Science: A Bibliometric Analysis Based on the Number of Publications and Cited References.” Journal of the Association for Information Science and Technology (2015). Accessed May 27, 2015. doi:10.1002/asi.23329.